Biggest Steals in Past Drafts by Each NHL Team

The 2018 NHL Entry Draft starts on Friday night with the first round and resumes on Saturday with rounds two through six. To give you a look into the past, we’ve complied a list of players who are considered “steals” in the modern era.

Manson was drafted in the sixth round, nineth pick (160th overall) in the 2011 draft by Anaheim. He decided to continue attending college and didn’t end up playing in the NHL until the 2014-2015 season. He’s played a career total of 261 games with 17 goals and 72 points.

Yandle was drafted in the fourth round, 14th pick (105th overall) in the 2005 draft by Arizona. After playing in Arizona for eight years, he’s played for the New York Rangers for two years and currently plays for the Florida Panthers. He has a career total of 85 goals and 466 points over 825 games played.

Bergeron was drafted by Boston in 2003 in the second round, 15th pick (45th overall). He’s known to be one of the best two way forwards in the game. He’s won the Selke Trophy four times and the Stanley Cup once. Bergeron has played for the Boston for fourteen years and has a career total of 289 goals and 734 points in 963 games played.

In 1999, Miller was drafted by Buffalo in the fifth round, 12th pick (138th overall). He played for the team for nine years after which he played for St. Louis, Vancouver, and now Anaheim. He won the Vezina Trophy in 2010 after playing for a career high of 69 games and ending the season with a .929 save percentage. Miller’s overall career save percentage currently resides at .915 in 737 games played.

Calgary drafted Gaudreau in 2011 in the fourth round, 13th pick (104th overall). After being drafted, he continued to play college hockey and joined Calgary in 2013. Since then he’s had a career total of 97 goals and 288 points over 312 games played. Gaudreau was also nominated for the Calder Trophy after his first season in the NHL and won the Lady Byng Trophy last year.

Faulk was drafted by Carolina in 2010 in the second round, seventh pick (37th overall). While this might not be as crazy of a steal as some of the other players listed here, he still dropped down and was drafted way lower than he’s worth. With 477 games played in Carolina, Faulk has 74 goals and 223 points. 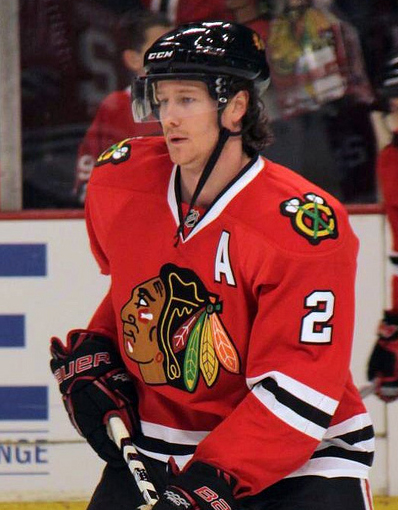 Barrie was drafted by Colorado in 2009 in the third round, third pick (64th overall). He played in the WHL for two more years before entering the league in 2011. In his time with Colorado, he’s scored 61 goals and has a total of 248 points in 406 games played.

Atkinson was drafted by Columbus in 2008 in the sixth round, sixth pick (157th overall). He continued to play college hockey and played his first game for Columbus in 2012. Since then, he’s played a total of  447 games during which he scored 145 goals and has a total of 273 points.

Detroit drafted Zetterberg  in 1999 in the seventh round, 24th pick (210th overall). Over the past fifteen years, he’s played 1,082 games and scored 337 goals with 960 total points. Zetterberg has also won the Stanley Cup and the Conn Smythe.

Chimera was drafted by the Oilers in 1997 in the fifth round, 15th pick (121st overall). He’s been on a few teams over the past two decades: Edmonton, Columbus, Washington, a season and a half with the New York Islanders, and then finished off this past year back with Anaheim. In all this time, he’s played 1,107 games and scored 186 goals and totaled 415 points.

LA drafted Quick in 2005 in the third round, 11th pick (72nd overall). He’s won the Jennings Trophy and the Stanely Cup twice, and the Conn Smythe. Quick currently has a .916 average save percentage over 556 games played.

Minnesota drafted Haula in the seventh round, first pick (182nd overall) in 2009. He continued to play college hockey at the University of Minnesota after being drafted for three more years. He made his NHL debut in 2013 and after four seasons, he was exposed during the expansion draft in 2017 where he was drafted by the Vegas Golden Knights. Haula has played 342 games during which he scored 71 goals and has a total of 144 points.

Rinne was drafted in 2004 in the eighth round, 31st pick (258th overall). He’s been Nashville’s starting goalie for the past ten seasons and in 567 games played, his average save percentage is .919. He won his first Vezina Trophy this season.

Lundqvist was drafted in 2000 in the seventh round, eighth pick (205th overall). He’s been New York’s starting goaltender since the 2005-2006 season. In the 805 games played he has a .919 average save percentage. Lundqvist won the Vezina in 2012 when he finished the season with a career high .930 save percentage.

Ottawa drafted Stone in 2010 in the sixth round, 28th pick (178th overall). Stone is currently one of the leading scorers for the team. He has a career total of 95 goals and 249 points over just 307 games played.

Gostisbehere was drafted in 2012 in the third round, 17th pick (78th overall). Due to injury, he didn’t really get to play for Philly until the 2015-2016 season where he had an amazing season that got him nominated for the Calder Trophy. Gostisbehere currently has a career total of 37 goals and 150 points in 220 games played.

Murray was drafted in 2012 in the third round, 22nd pick (83rd overall). He was a backup goalie for the two season before getting the starting job this past year. In his 111 career games played, his average save percentage is .917. Murray has been an integral part of Pittsburgh winning two Stanley Cups.

Palat was drafted in 2011 in the seventh round, 27th pick (208th overall). In his first full season with Tampa Bay, he scored a career high of 23 goals which got him a Calder Trophy nomination. He’s currently played 363 games and scored 85 goals with a total of 253 points.

Hansen was drafted in 2004 in the ninth round, 29th pick (287th overall). After playing with Vancouver for eight years, he was traded to San Jose. Hansen has scored 109 goals and 147 assists in 626 games played.

Holtby was drafted in 2008 by Washington in the fourth round, second pick (93rd overall). He became their starting goaltender a few years later in the 2013-2014 season. In the 361 games he’s played, he has a .919 average save percentage. Holtby has won the Vezina Trophy and the Jennings Trophy.

Winnipeg drafted Hellebuyck in 2012 in the fifth round, ninth pick (130th overall). The goalie has only played 149 games, only becoming the starting goalie for the team in 2016. He currently has a career average save percentage of .917.

Not all of these players are superstars, but quite a few have gone on to become captains, win Stanley Cups, and numerous other awards. This list shows that everyone has potential to become an integral part of their future team regardless of which round or pick they get drafted at.