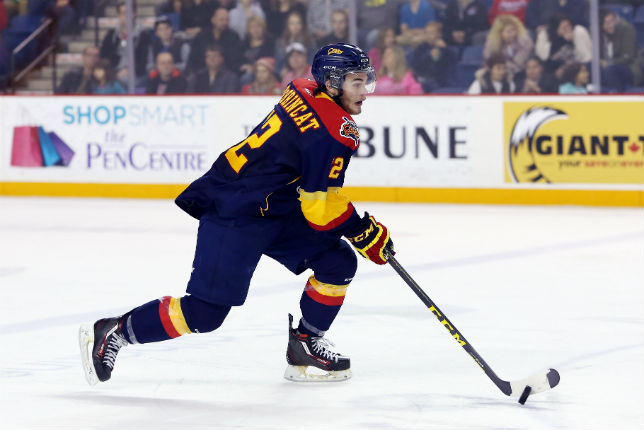 Blackhawks prospect camp has 45 players ready to show everyone how they have grown and what they can bring to the team in the future. The team has many new draft picks and invitees that are ready to show what they can do. Some may try and make the roster and others will try to show the growth they had with their team within this past year. Here are some of the top prospects to keep an eye out for.

1. Alex Debrincat (LW)
Debrincat was selected 39th overall in the 2016 Draft by the Blackhawks. Since then, he led the OHL with 65 goals and 62 assists. He won the Red Tilson Trophy for the most outstanding OHL player. Many scouts believe that he can make the jump into the NHL this season, and can have a huge effect on the Blackhawks offense. Playing as his natural left wing, he can play along Patrick Kane and Artem Anisimov, but can also be placed on a third or fourth pairing for the team.

2. Alexandre Fortin (LW)
Fortin was signed by the Blackhawks after being invited to prospect camp. He had an outstanding camp and played in the pre-season with the Hawks before having another outstanding season with the Rouyn-Noranda Huskies. Fortin posed career highs in goals (22), assists (30), and shots on goal (151). His ability to play along the boards and get to the net can help him make the roster.

3. Henri Jokiharju (D)
Drafted 29th overall in the 2017 Draft, Jokiharju is looking forward to showing the Blackhawks why they made the right choice picking him. He played the 2016-2017 season with the Portland Winterhawks in the WHL and led all rookie defenseman with 48 points (9G, 39A). Additionally, he won the gold medal with Finland in the 2016 IIHF World 18 Championships. Even though it will be tough for Jokiharju to make the roster this early, he will certainly be one to watch in the next couple of years.

4. Ville Pokka (D)
After being traded to the Hawks for Nick Leddy in 2014, Pokka he spent his career in the AHL. He has been a great player for the Rockford IceHogs but is ready to make it to the NHL. Even though he will not be at prospect camp, he will attend the Blackhawks training camp before the pre-season. Pokka spent three seasons in the AHL, racking up 6 goals and 24 assists this season. He will try to make it to the NHL this season in attempt to aid the weakened Blackhawks defense.

5. Luc Snuggerud (D)
Snuggerud played with Nebraska-Omaha in the NCAA division during the 2016-2017 season, but also played with the Rockford IceHogs at the end of the season. He had 10 goals and 21 assists at Nebraska, and 1 goal and 4 assists during his time in Rockford. Snuggerud currently has a 3-year entry-level contract with the Hawks, but his future remains uncertain. He looks to show the Blackhawks his skills and who he is a player in order to be NHL-ready one day.

View all posts by Allie